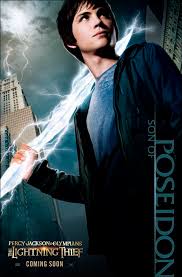 Cinemablend has the latest news about a possible Percy Jackson sequel. Apparently, the crew from the first film is already in talks about the production of a second one:

Based on the young adult series of novels by Rick Riordan, the first movie was a disappointment in all fields, bringing in only $88 million domestically on a $95 million budget and suffering under comparisons to the Harry Potter movies. Just like the second book in the series, the sequel would be titled Percy Jackson and the Olympians: The Sea of Monsters, and Scott Alexander and Larry Karaszewski have been hired to write the script. According to an unnamed source, Logan Lerman, who starred as the titular Jackson, will be returning, but director Chris Columbus and producer Karen Rosenfelt will not. Should things work according to plan the sequel could shoot as early as this summer.–Source: Cinemablend

I have yet to see the first film, but I do know that it received some mixed reviews. The concept looks interesting but I’m guessing it just didn’t have enough of a pull to bring in the fans. Plus, why not just wait until the Harry Potter and Twilight franchises are done with. At least then the competition won’t be so stiff. Did anyone see the first film? Would you see the sequel?